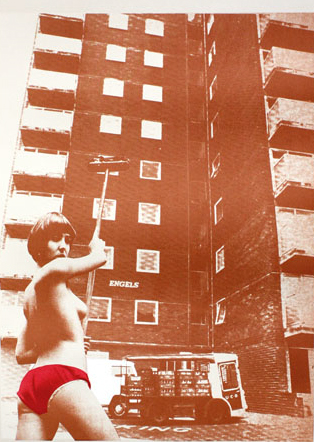 Sarah Hardacre’s works present collage and screen prints that feature backdrops of Salford
tower blocks against the sensual curves of cut-outs from vintage magazines. Her practice is
fuelled by 20th century social history interests, her fascination with the utopian ideologies of
Modernism, working class social movements, sexuality and social policy.
The women presented in Sarah’s prints draw strength from fragilities and bring promise for
change on a grander scale. Their natural curves and sexuality against the brutalilst concrete
represent a stance against the male dominated environment, technology and politics. Just as
the images of Salford’s post industrial landscape can be read as nostalgic of a lost era of
optimism, her scantily clad women wistfully hark back to a time before fake tan, manicured body
hair and plastic surgery; a time when erotic images were much closer to the reality of women’s
bodies.
As a woman in the traditionally male dominated world of printmaking, Hardacre is able to draw
upon age old ideas of social utopia and sexual revolution. Her works introduce women as
empowering forces, spiritual feminising and emancipated from the mass produced world around
her. In some way signifying the feminine identity of the artist, these images of women represent
a retreat into fantasy; a safety valve for competence in the real world.
- - -
The title of the exhibition ‘You Smile First’, is drawn from recent feminist writing exploring the
notions of Erotic Capital and Emotional Labour in today’s service economy. Smiling is the
universal sign of welcome, acceptance and cheerfulness towards others, yet this simple social
skill plays an easily overlooked but crucial role in business, political, social and sexual
relationships. Smile and the world smiles with you; now hold that smile for fifteen hours in the
face of abuse, arrogance, insult and injury while you work your shift. Smiling suddenly becomes
laborious and a frankly unequal exchange. Interestingly, all the women featured within the prints
of this exhibition are models, working on a job, employing their erotic capital to full effect but the
only ones smiling are the Bunny Girls in ‘Going to Work’. But rather than make a statement
about the commodification of human emotions and expression, this exhibition questions and
explores ever emerging trends which have dehumanising effects on the workforce and service
related economies.
Hakim, Catherine (2012) Honey Money: Why attractiveness is the key to success. London:
Penguin Books. The social magic of smiles Pg. 132-133

Smiling makes almost everyone more attractive, but it works especially well for women.
Feminist politics mean that women use smiles less often than they used to, both at work and in
private life. Smiling has now become political. Arlie Hochschild’s dissection of the politics and
economics of smiling in the airline industry now encourages many women to regard smiling as
‘emotional labour’ which they will not perform unless they are paid to do it, and maybe not even
then. Like so many other staff in service occupations, airline cabin crew are asked to smile
when serving customer, to be polite and charming whenever possible. Yet American women
often refuse to do so. When a male customer asked an air hostess why she wasn’t smiling as
she served him, she replied, ‘You smile first.’ When he did, she retorted, ‘Now hold that for the
next fifteen hours,’ and walked away. The ‘liberated’ air hostess is now rude, as well as refusing
to do her job as required by her employer.
For more information on this collection and Sarah's work please visit
www.the-printroom.co.uk
or
www.paulstolper.com
Powered by