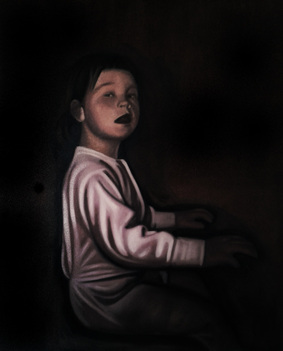 Work in progress - Keith Ashcroft
KEITH  ASHCROFT.
Keith Ashcroft is an emerging figurative oil painter based in Manchester.
His paintings are a instinctual, visual response to a variety of  photographic imagery.  His aim is for the work to take the form through the conditions of its making, revealing the delights and faults that paint provides, dictated to by the individual needs of each painting.

Lost & Found.
By
Keith Ashcroft.
“Readers, friends, less than friends, enemies, critics! Here I am at it again.
Don’t judge me too soon! Wait awhile for what’s to follow! It all clears up! Develops, straightens out!”
Louis Ferdinand Céline.

My shadow remains and guides my body through days of routine, I careful claims of routine, simple sections of time dedicated to the lonely pursuit of the painted form. Desperate moments, captured devotion resembling the dereliction of man. A man at his worst version of himself, deep and darker for it, cruel and callous, arbitrary hardened. An area quiet and still, calmly bold with relentless delay.
Guilty desires socially severe.
Devouring an obsessed fixation, concentrated concern for each mark made. Attaching glory to the ending of a day, for it brings him closer to the next, a new day, closer proximity to another day of painting. The morning is fresh and brand new; he celebrates the fresh taste of a new day dawning. Furthermore, this ending day I shall concede to its inevitable darkness as it floods my cracks and crevices, throwing a shadowed blanket about the light. A static lack of logic.

For the work to take the condition of it’s making, display and circulate as the basis of its content. Using the medium against itself in order to expose the mannerisms it possesses. Passively potent passages of considerable pretexting enable the promotion of the self. Constipated.
Eventful exchanges of considerable violence amounts to the battlefield, entertaining hurtful chances, and irreversible glances are tearful torments, clear and clever, thinly glazed. Boldly beautiful.
Redeemed ridiculous.

A collective gathering of scattered claims, the canvas resists a permanent portrayal and betrayal.

Derived from the deprived.
Layers of realms with reasons to forget, revive the realized and capture the drop, pick it up and re-introduce, re-acquaint and re-instate, remember and forget, re-imagine and reimburse with additions and conditions attached for relapses with mishaps and lapses of judgmental illness. Sinful advances on last chances at cheap glances at slow dances.
Forgotten regrets line up their cheap threats with care-free, vibrant vibrating faces, vibrating scores of portions with previous attempts at failure, attempting failure with a medicated stroll at a leisurely pace, populated with various attempts at ignorant bliss, blissfully pregnant with misconception ideas.
Favor.
Simple exposure, deeply dark blues penetrating the breeze with a permanent stain, bewilders the eyes while a crevice expands and exhales a pleasurable collection of blues and blacks. The cracks with crevices crave and cringe for sunlight to dawn upon them, throwing down the light with all its warming glory glowing. Glossing the fiction with friction, glowing with shiny smiles and upside-down frowns. Scrutinized and swindled by scraping glances, bruised and battered brushes convey fiction and reality; friendly faces inspire resentment, charitable charm. Sully/sullied. Woeful claims for fragile, subtle moments. The painted-rant shows its perishable posture. Defiant strokes scouring with searches of dysfunctional ruin, the painted man, constructed with failures. Line drawing fading with fury, waning in the margins, withering retorts clogged up with charitable chants defying instruction and replacing with destruction, defiant strokes compete with confident marks, making the human form ideas above his station

Careless and careful moments revel in the delights that paint provides, predictable remarks of marks making and resembling the thoughts and themes that occur then reoccur, collecting and gathering amongst the careful and carefree. Glossy glances. Pushing and pulling the paint, forcing the image to find the courage, a fathomless fling of peaking for perfection. Impossible perfection. Strokes of paint.

My paintings are a record, a documented despair, and a cathartic creation of woeful devotion.
I begin with a woeful loathsome tale, a slumberous slur upon the righteous romp all rigid and rotten, a local lurking, a loiterer perspiring at the neck, a prudish prophecy with tremendous rumor, a nomadic noise echoing at the base, shaking with stiff violence, a juxt-opossed rendering, an omnipotent omission of prosperous prevailing.